Brad Ack, Executive Director and Chief Innovation Officer at Ocean Visions
Peter de Menocal, President and Director of the Woods Hole Oceanographic Institution
(As published in an op-ed in The Hill)

The world is badly off track to meet emissions reduction targets set in the Paris Agreement, according to a recent UN report, which projects we’re on a path to a 16 percent increase in CO2 emissions by 2030 — far from the 45 percent decrease scientists say is necessary to avoid dangerous climate impacts.

Our failure to deliver emission reductions in a timely way means we must now add a new, parallel pillar of climate action — directly cleaning up the legacy carbon pollution emitted over the past 170 years — if we are to create a safer climate future for people and nature.

Doing so is increasingly understood as imperative. The UN’s Intergovernmental Panel on Climate Change (IPCC), with the world’s leading group of scientific experts on climate, has stated with “high confidence” the potential for large-scale carbon dioxide removal (CDR) to limit future warming to the critical 1.5 degree Celsius threshold or less — the target set in the Paris Agreement.

While work has started on the development of approaches, most potential pathways are in their infancy, meanwhile we are just beginning to develop and test different approaches and measure their range of potential consequences. And to date, most of this CDR focus has been on land-based approaches.

It’s time to turn our attention to the other 70 percent of our planet’s surface — the ocean. The ocean has buffered humanity from the worst effects of climate disruption by absorbing about 30 percent of all anthropogenic CO2 emissions and trapping more than 90 percent of the excess heat caused by CO2 pollution. Without the ocean as a giant carbon and heat sink, the impacts of our emissions would have rendered the Earth effectively uninhabitable. But this buffering has come at great costs to the health and function of the ocean.

The good news is that the ocean may have the potential to significantly contribute in new ways to reduce the buildup of carbon pollution that is affecting it so seriously. Ocean-based CDR pathways build on the natural power of the ocean to remove and safely store carbon, which it already does at very large scales. The ocean has vast potential to durably store carbon at time and mass scales that match the problem. Indeed, if all human emissions since the Industrial Revolution that are now in the atmosphere were transferred to the deep sea, it would only increase seawater carbon content by less than 2 percent.

There are a number of potential ocean CDR pathways — from growing vast quantities of marine plants, to removing CO2 directly out of the sea, to burying it safely beneath the seafloor. While these are promising solutions, all of them require a great deal more research, development and testing to understand their potential, range of impacts and benefits, as well as possibilities for scaling. This research must also focus on issues of equity, justice and proportionate risks, with broad community input.

A top priority for science is to advance our understanding and monitoring of the oceans so that we can measure impacts and viability of these potential solutions. Specifically, this means developing more complete understanding of how the ocean works at this scale, how it cycles carbon from the surface to deep waters, and how the oceans are changing. With this new capability, we can test the effectiveness and impacts of these ocean CDR approaches.

How is science stepping up to meet this important challenge? Ocean Visions, a collaboration of research institutions and organizations active in ocean management, recently released five digital technology road maps designed to accelerate safe and equitable development and testing of a suite of ocean-based CDR technologies. The maps provide overviews of the technologies, critical obstacles and critical priorities to accelerate development and testing, all based on sound science.

Woods Hole Oceanographic Institution, an Ocean Visions member, is exploring new ways to monitor whole-ocean health and function from the surface to the ocean floor in real-time. Envisioning an ocean “internet of things,” an intelligent deep ocean armada of new generation sensors and autonomous vehicles will provide a 4D “data cube” capability to capture key ocean health and function parameters. Many “blue economy” jobs would be created by this science and engineering innovation challenge.

The new IPCC report underscores the need to evaluate ocean-based CDR approaches and to establish appropriate monitoring and verification capability. This urgent challenge will depend upon a rare combination of visionary engineering and science, superior ocean-going capabilities, as well as transformative funding.

Working together, we can — and must — advance our understanding of the oceans to bring new carbon removal tools to the greatest challenge humanity has ever faced, while at the same time redoubling efforts to zero out emissions. This requires an international and multisector community, expanding investment and engaging society. It may be one of the biggest enterprises ever attempted by humans. Is there any work more important? 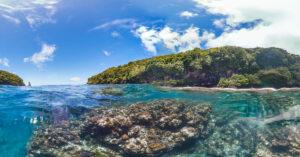